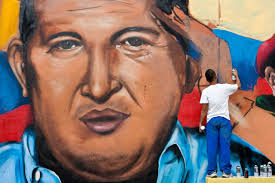 As the state of global and national politics becomes increasingly heart wrenching I reflect on my enthusiasm for change and my willingness to imagine another world. I was inspired by then having returned from the World Youth Festival in August 2005 themed “Against war and imperialism, We fight for peace and solidarity.” And the fight for peace and solidarity continues on… here was my report back originally published in La Palabra, UC Davis Associated Student Papers, fall 2005:

The World Youth Festival is a conference that takes place every four years in different countries that the Global Federation of Democratic Youth approves by consensus. The FMJD has general meetings that Anti-Imperialist organizations from 35 different countries participate and organize the World Youth Festival. So it is no surprise that the FMJD voted unanimously to hold this year’s festival in the Bolivarian Republic of Venezuela, with its new found people-first government.

The purpose of the festival is not only to educate organizers, activist and students alike in global issues affecting people of color but also to provide a motivation to organizers, especially in a setting like Venezuela where it is being proven that another world is possible –a world that puts people over profit.

Venezuela democratically elected a socialist president who transformed the country by proposing a new Bolivarian Constitution that was approved by the Venezuelan people.  This has allowed the President, Hugo Chavez, to put in place a humanitarian government that has developed a popular political consciousness. It is because of the Bolivarian government that Venezuela was able to house will hold their first World Youth Festival and their first World Social Forum in January 2006. In Fact, the president himself spoke at the Inauguration of the Festival against Imperialism on the 9th of August, which marked the 60th anniversary of the Hiroshima and Nagasaki tragedy caused by imperialist acts.

The theme of the Conference was “Against war and imperialism, we fight for peace and solidarity.” Four stations were designated in Caracas. Fuerte Tiuna was one of the military bases that people went to when there was an attempted coup against Hugo Chavez. Throughout the festival workshops, seminars and forums there focused on Peace, War and Imperialism. The workshops held in the Bolivarian University of Venezuela focused on education, culture, science and technology –which fit the resources available in the university. Parque Central is the central commercial complex in the heart of the capital and their focus was on employment, economy and development. Finally, The Teresa Carreño Theatre held workshops on Democracy and Humyn Rights.

Although the workshop stations were in Caracas, people from all over the world were housed in different areas in Venezuela –sometimes even outside of the state that the conferences were held due to the amazing turn out. Some people of the United States Delegation, like me, were housed in Los Teques in the state of Miranda in a military base called Pan de Azucar. Like many others, I was hesitant to stay at a military base but we soon learned that the military of Venezuela has anti-imperialist outlook and have their own social programs for the people of Venezuela.

The Military has a symbiotic relationship with the people and serve as social agents that have a political and social consciousness. The Military of Venezuela has farmer markets, health care clinics and cultural events in rural or underserved communities. The Military also nationalizes citizens that have been neglected by previous governments. Nationalized people with identification cards have access to healthcare, education and food programs. Throughout the Festival military men and womyn served as security, organizers, hosts in the military bases, and facilitators in certain workshops.

Aside from the workshops, part of the festival was to visit the provinces and learn about social programs that Venezuela is working toward. I was fortunate enough to visit Puerto La Cruz in the state of Anzoatagui. We were housed in a hotel that used to be corporate owned and is now the government’s property for functions such as this one. The morning we arrived from our 5 hour trip from Los Teques, we were fed arepas and freshened up to see the Governor of Anzoategui, Tarek William Saab speak. Having no understanding of local or state politics of Venezuela, I was surprised to hear a public official speak about US intervention in Latin America –country after country with a hope for revolution and US president after US president that has intervened.  He emphasized the importance of solidarity from the people of the States as well as people of Latin America that were present.

During the trip we met people of different parts of the hemisphere as we visited the Military Academy of Anzoategui and some of the Missions. The Missions are social programs run by communities with resources available from the government. There are food stores that are similar to what we know as Women, Infants and Children (WIC) but are low price for everyone and free for people of low income. Misión Rivas and Robinson focus on the anti-illiteracy campaign and the accessibility of education by using Cuba’s educational model. The Healthcare Mission is also modeled after Cuba’s great health care system. In the past, Venezuela’s health care has concentrated on cosmetic surgery because of the Miss Universo pageants that have won time and time again and now Cuba is doing their part in training and sending doctors to focus on basic health care that was once absent from many underserved and impoverished areas. People are also sent to Cuba to get surgery on their cataracts and are operated at no cost.

Chavez spoke out against the atrocities that the United States government has committed against innocent people but made a clear distinction between the people of the United States and its government. In his testimony, he went into detail about the coup against him in 2002 that the United States corporations clearly took part in. The US government was the first nation to acknowledge the new president put in place. He told the delegates that in his defeat he walked the streets of Caracas when a womyn grabbed him by the arm and told him to follow her. She walked him to the very top of the impoverished hills of the city to find her house. He saw her children and husband gathered around a fire in the living room with no light because of the corporate strikes intended to decrease Chavez’ popularity. The womyn told him, “You see that wood that is cooking my food?”
”Yes,” he said intimidated. “That’s my bed, the last of my furniture. And I will burn this house down to feed my family…. But don’t you give up, carajo!” she said to him. He said it was then that he knew that he had to do everything in his power to restore quality of life for all people, starting with Venezuela.

After the Tribunal, someone asked me where I was from. “I am a Chicana from the United States,” I said. “From the United States? Let me ask you something. Why hasn’t there been a revolution in your country? Do you not know everything your country has done?” That question gnaws at my very conscious everyday to know that living in the States we have a social responsibility for the harm our government has done. Why hasn’t there been change in the States like in Venezuela?

Sara Martin is a mother, artist, writer and jewelry artisan. In Sara's mothering journey, she began the process of cultivating and liberating herself to become a positive healing force for her community by providing support for their creative projects. Sara is currently developing content on sacred womynhood, the power of autonomous self-healing through art, writing and working with medicine allies such as crystals, animal totems, dreams and herbs. View more posts